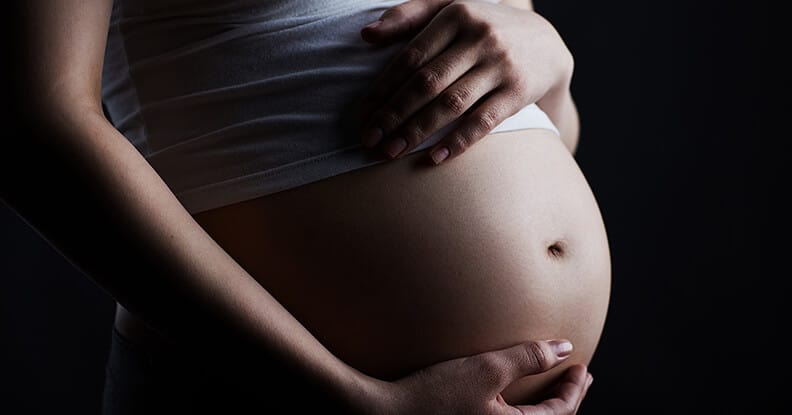 Most expecting mothers expect to have their babies naturally.  However, over the last decade, there has been an increase in the number of caesarian sections due to serious obstetrical risks to both mother and baby. [i] The risks may arise due to prenatal complications including preeclampsia, gestational diabetes, placenta previa, and fetal growth restriction, among others.  There are also risks that develop during labor either due to the size of the baby resulting in an arrest of fetal descent, prolapse of the umbilical cord, or even a uterine rupture - all requiring an emergency caesarian section.

The risk to Mom and baby may become greater from the first stage of labor through the second, as the stresses on the baby and Mom become more intense.  During the second stage of labor, Mom begins pushing and bearing down, and the longer this goes on, the more tired she becomes. How both Mom and baby react to these stresses dictates whether an expedited delivery by way of C-section will be necessary. It is well established that the frequency, duration, and intensity of contractions tend to increase during the second stage of labor and if the baby reacts poorly to these stresses, an emergency caesarian section is required.  Fetal monitors can detect a reduction in a baby’s heart rate, which can mean that the baby is hypoxic and does not have the necessary oxygen.  Once a baby becomes hypoxic, the obstetrical team must intervene, otherwise, the hypoxic condition will continue and may lead to brain damage or in the worst cases, death.[iii]

There are instances where a Mother who has previously given birth by caesarian section may be given the option of delivering the subsequent baby vaginally – this is known as a “VBAC,” or Vaginal Birth After Caesarian delivery.  However, the obstetrician is charged with the duty of making certain that the mother’s past obstetrical history is not a contraindication (a reason to withhold a medical treatment). An obstetrician considering a VBAC delivery must weigh the risk of the potential harm to Mom and baby from a possible uterine rupture versus the likelihood that the labor process will successfully result in a vaginal delivery.  Also known as a “TOLAC,” or Trial of Labor After Caesarian Section.

Specifically, the obstetrician must evaluate the following criteria in order to make appropriate recommendations to Mom, including:

There are obstetrical medical malpractice claims holding physicians accountable for recommending VBAC deliveries, despite the high risk of a uterine rupture. In one case I recently litigated, all of the tell-tale signs of a likely uterine rupture and a failed TOLAC were present.   The mother was 35 and had delivered her first child by caesarian section several years earlier at full term.  At the time of the first delivery, the infant had an estimated fetal weight of 7 pounds.  There was a documented failure to progress and ultimately an arrest of labor in the first stage despite augmentation by Pitocin. A single layer closure had been utilized after the delivery.  The child was born healthy with strong APGAR scores of 9 and 9.

Several years after, Mom was confronted with a choice as to whether to go forward with a VBAC delivery or have an elective c-section.  Mom was advised by her obstetrician that her uterine rupture rate was only 1 percent and therefore her risk to the health and safety of the baby was minimal.  Mom was never advised as to what her projected or anticipated success rate of a TOLAC would be.  Mom went forward with the TOLAC with the estimated fetal weight of the baby at 8 pounds (larger than the previous birth) and the location of the placental implantation on the anterior portion of the uterus along the previous scar.  Not surprisingly, the first stage of labor was again noted to be protracted requiring an increase in the “high alert drug” known as Pitocin for multiple hours. As a result of the protracted labor, mom and baby developed an infection known as chorioamnionitis which can be extremely detrimental to the baby’s well- being.  The frequency, duration, and intensity of the contractions increased ultimately causing great stress on the Mom and baby.  The baby’s fetal heart rate was slowing down and Mom’s contractions were becoming increasingly excessive, occurring more closely in time.  Finally, there was a long deceleration, also known as bradycardia where the heart rate of the baby fell to well below 90 beats per minute, demonstrating an obvious uterine rupture and a now hypoxic/anoxic infant.  Despite the findings on the fetal heart monitor tracings, the obstetrician did not call for a c-section for approximately ten (10) minutes - delaying the rescue of the child and causing even further damage to the baby’s brain.  The baby was born with extremely depressed APGAR scores requiring intubation after birth and brain cooling.  The infant was diagnosed with hypoxic-ischemic encephalopathy (HIE) and cognitive deficits due to all the inept treatment during the labor and delivery process and a failure to appropriately assess the risk of uterine rupture versus the likelihood of success for a TOLAC.

Below in Table One: The uterine rupture rate for this Mom was a total risk of 13.09% with increases noted for Pitocin augmentation 1%, prior single layer closure 5.6%, prior c-section with Pitocin at 7% with total probability for uterine rupture at 13.09%. The TOLAC had a total failure rate risk of 61.65% with increases noted for no prior vaginal delivery at 35%; prior c-section for cephalopelvic disproportion/failure to progress at 41% and a total probability for TOLAC failure at 61.65%

As demonstrated above, if the obstetricians had paid attention to the statistical risk of failure rate associated with going forward with a TOLAC, and the uterine rupture rate well in excess of any plausible standard, and performed an elective caesarian section, this child would have avoided the devastating consequences of brain damage as a result of the delivery.  Obstetricians must assess the data available to them, and inform their patients of the risks and options to avoid this type of catastrophe and ensure the delivery of a healthy baby!