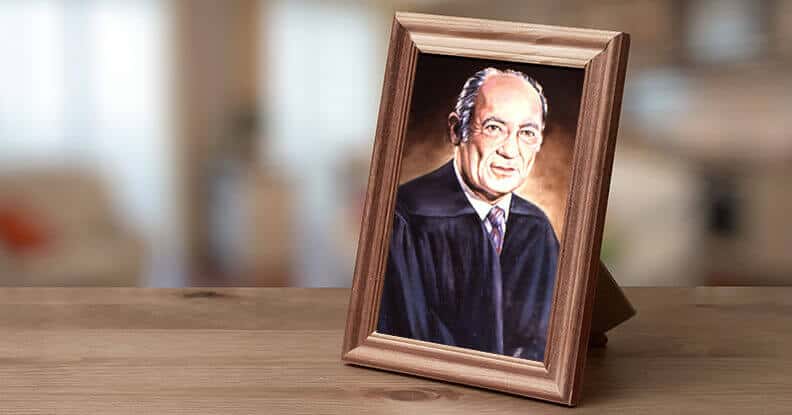 He was an immigrant baker’s son, born in a tenement on the lower east side in another era, 1913, and he graduated law school in the heart of the depression. This shaped the person he was, forever fighting for the rights of the “multitudinous many”, including civil rights, criminal defense, labor and employment, equal education, and of course, compensation for the injured. His career early on took this approach, first representing trade unions, then becoming President of the fraternal order Knights of Pythias where he broke the denial of membership to non-whites; in 1957 he became President of NYSTLA; in 1963 President of ATLA (now AAJ); and in 1976 became an Associate Judge of the Court of Appeals. Perhaps the attribution most associated with his career is him as a trial lawyer.He was recognized among the titans of his time, which were the likes of Harry Gair, Moe Levine, Al Julian, and Bob Kelner in New York, and elsewhere Melvin Belli of San Francisco, F. Lee Bailey of Boston, and Phil Corboy of Chicago. But it was Jack Fuchsberg who first broke the sound barrier of that time, receiving the Country’s first million dollar award for an individual injury.David Margolick, writing for the New York Times, described the story and summation that brought on that verdict:One windy day nearly 30 years ago, Martin Ergas, an 8-year-old Long Island boy, was walking with his father near the corner of Seventh Avenue and 34th Street. A sudden gust of wind knocked over a rotting sign on the top of a nearby Barracini candy store. It struck the boy, crushing his spine and leaving him paralyzed for life. A lawyer named Jacob Fuchsberg took the boy's case and, standing before a jury five years later, he tried to assess his client's loss. He noted that a horse named Nashua had just been sold and sent out to stud for $1.2 million. The Metropolitan Museum of Art had just bought Rembrandt's ''Aristotle Contemplating the Bust of Homer'' for $2 million. Was the happiness of a young boy who loved sports and had an I.Q. of 139 worth any less?Being wheel chair bound did not stop Martin from becoming a lawyer, so inspired was he by his counsel.In 1976, Jack left this successful career for the Court of Appeals, where he might widely apply the legal principles that motivated him throughout his career.On the bench, he dissented more often than any other judge, often writing long dissents. He was viewed as a liberal. Not only was this true about his decisions on tort cases. For instance, he and Judge Bernard S. Meyer were described by the Legal Aid Society of New York as "the most defense-oriented" judges.In Levittown Union Free School District v. Nyquist, a case reviewing a strenuously debated issue of its time, whether state education money should be used to equalize spending between rich and poor school systems, the Court of Appeals ruled 6 to 1 that these inequalities did not invalidate the state’s public education financing laws. The Levittown case was brought by 26 relatively low-income school districts and was later joined by Buffalo, Rochester, Syracuse as well as NYC. The only dissenter in the case, Judge Jacob D. Fuchsberg, said the Court should have upheld the Appellate Division decision, which would have forced substantial steps toward more equal spending among districts. He said ''Poor children, no less than rich, and the nation of which both are a part, are entitled to an education that prepares today's students to face the world of today and tomorrow...Those who took and tolled the testimony tell us that, by any standard that counts, for the multitudinous many, no such educational opportunity truly exists.''Twenty years later it became the law that state education money must be used to equalize spending on public education for all children.When he retired from the bench and returned to private practice, he said at the time: "Unlike in the 1960's, when America fought in the street for its rights, today we are waging the fight in the courthouses. We are making progress, and it has to be done through the law."His mission extended to the rights of the injured.This article was recently prepared for the New York State Trial Lawyers Association (NYSTLA).