Police in Pursuit Who Cause Car Crashes Can Be Sued 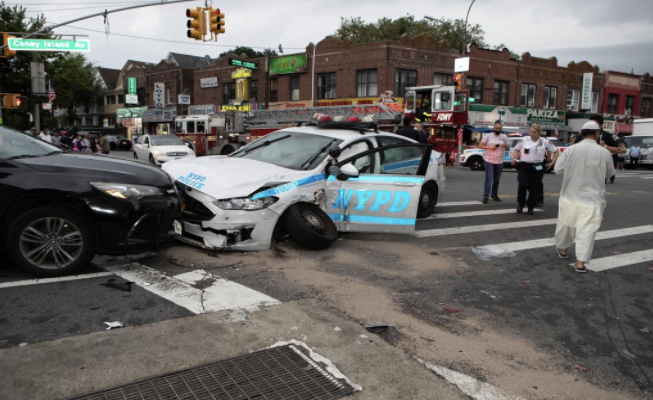 It’s 8:00 AM in the morning. A mother is driving along on the parkway with her young child strapped in the back seat. Her morning routine is to drop her son off at a daycare nearby her job at a community college.

She notices in her rearview mirror a police car tailgating her. The highway is about to expand to add a third lane on the left, so she moves over to get out of the way of the State Trooper’s car.

At the same moment, the police car goes into the third lane as well, unfortunately striking her left back panel with so much force that her car spins around and slams into a light pole. She’s not hurt but her son is. The son’s door is where the impact occurs, and his head slams into the side of the car. They are rushed off to a hospital. Her son has suffered a fractured skull and bleeding on the brain. He recovers, but never completely from the brain injury. Still in shock, the mother wants to be reimbursed for the damage to her car. Being a single, working parent, she needs this to afford another car to get to work.

The insurance company rejects her request for reimbursement, concluding the accident was her fault! The mother is later informed that she is given a traffic ticket for changing lanes without using her blinker. She goes to a lawyer who says she does not have a case.

Next, she called the Jacob Fuchsberg Law Firm.

To us, it did not sound right that while minding her own business, on her normal morning route to her son’s school and work, a police car came from behind and crashed into her. The injury to her son was serious. It will affect his executive functioning and performance for the rest of his life.

Attached to the police report was a typed witness statement signed by the driver of the vehicle behind them, which declared that the mom changed lanes without using her signal. We called the witness. He had more to say. While on the one hand, he said, she did not put on her signal, on the other hand, he saw that the police vehicle came speeding upon her.

Interestingly, this did not make it into the statement the police wrote on the interview that they asked him to sign. The witness was nervous telling us the whole story. We also knew from the records that the police officer was pursuing another vehicle, traveling ahead of our client, to pull it over for speeding at 60 mph on the 45-mph parkway.

Most cars have a “black box”. It is more formally called an Event Data Recorder (EDR). It has "sensor and diagnostic modules" that capture information, such as the vehicle’s speed and wheel movements. In the event a collision needs to be investigated, the black box data details the vehicle's performance. This Trooper’s car had a black box but no information had been downloaded for the police investigation!

We started a lawsuit against the New York State Police claiming that the State Trooper was negligent and reckless. A police vehicle in pursuit may exceed speed limits but the actions must be in balance with the circumstances, so as not to harm innocent bystanders.  Rule 11B4 of the Manual for Police of New York State sets out the proper police policy that has to be followed during a pursuit. Officers must consider present danger, length of pursuit, and speed. A pursuit must be terminated when there is an exceptional danger to the public.

We wanted to know – were the proper pursuit policies followed here? We received a court order to inspect the police vehicle’s black box.

Our expert downloaded the black box data, which revealed that the State Trooper sharply accelerated his vehicle moments before it struck our client’s car, to as fast as 78-mph on this parkway having a speed limit of only 45-mph. At the last moment, he slammed on the brakes and cut his wheel, veering into our client.

We also know the vehicle he was chasing was going 60 mph. His acceleration to 78 mph and attempt to get around our client’s car to give a traffic ticket to a car going 60 mph in a 45-mph zone was a disproportionate and unsafe pursuit. He needed to clear his pursuit with his commander before doing such a thing and he did not. This trooper's perilous and unauthorized chase was the first violation of policy.

The second violation was that he did not have on his emergency lights and siren.

The third violation was how he started the pursuit. He was facing oncoming traffic that he was clocking with his radar. But this meant that he had to turn his car around and wait for passing traffic before starting up, giving the vehicle he wanted to pursue too much of a lead for it to be safe for him to begin this type of pursuit.

In these ways, proper pursuit protocol was violated. But beyond that, we were particularly taken aback by the police investigation. It turns out that the investigation was undertaken by the State Trooper’s very own squadron. In our opinion, it is a conflict for officers to be investigating accidents by fellow officers with whom they work every day.

How else to explain the incomplete witness statement as well as the failure to download the black box data! We asked the NYS Attorney General to investigate this, and we hope that happened. Not only did this inadequate and biased investigation nearly deter our client’s son’s right to receive fair and just compensation, but it also raises concerns about whether the NYS Police are doing proper self-evaluations to learn from these tragic events and discourage them from occurring.

Fortunately, because we unearthed what truly happened, we were able to get a  multimillion-dollar settlement.