Mental Stress of Doctors Can Cause Medical Errors 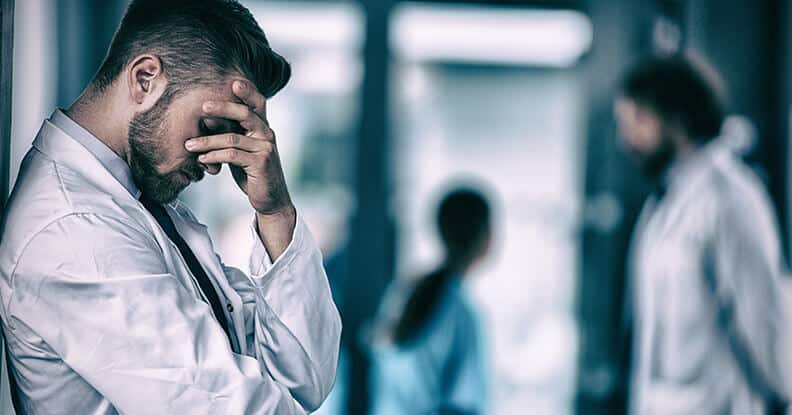 Anyone who has watched a medical series on television has seen portrayals of young residents who can barely grab a few hours of sleep in between rounds and suffer emotional and mental stress from dealing with terminally ill patients. Unfortunately, this situation is not fictional. Doctors suffer from burnout, depression, and other physical and psychological issues due to the pressures of the job.Of course, mental stress isn't a problem that only doctors experience. However, because the health and lives of people are in their hands, it's particularly a cause for concern.

Many Doctors Report at Least One Symptom of Burnout

Although there is increasing awareness about the extent of stress that doctors experience, that doesn't seem to be resolving the issue. In fact, the number of doctors expressing dissatisfaction with work-life balance rose to close to 50 percent in 2014. Over half reported one or more symptoms of burnout that year. Unfortunately for us as patients, the doctors that we are most likely to see, such as those in the emergency, internal, and family medicine, had the highest rates of burnout.Often, doctors are less likely to seek help for job-related emotional problems than people in other professions. Obviously, mental stress affects their own well-being. In some age groups, physicians are six times more likely to commit suicide than non-physicians. However, it also affects the care that we receive as patients and increases the likelihood of medical errors occurring.As patients, we can't control the mental or physical health of our physicians and other medical professionals in whose hands we place our own health and lives. It's up to the medical community to look after the people on the front lines of health care to ensure that the understandable mental stress of their jobs don't impact their own well-being or jeopardize the health and safety of others.If you believe that you or a loved one suffered harm because of improper actions of a doctor or other medical professional, you can schedule a consultation with one of our New York medical malpractice attorneys. Our attorney will help you determine whether you have legal recourse for the injuries.Source: The Huffington Post, "Your Doctor's Health Affects Your Health: Latest Reports on Physician Health Alarming," Paul Spector M.D., Jan. 25, 2016